16.2 The Urgent News of the Tidings 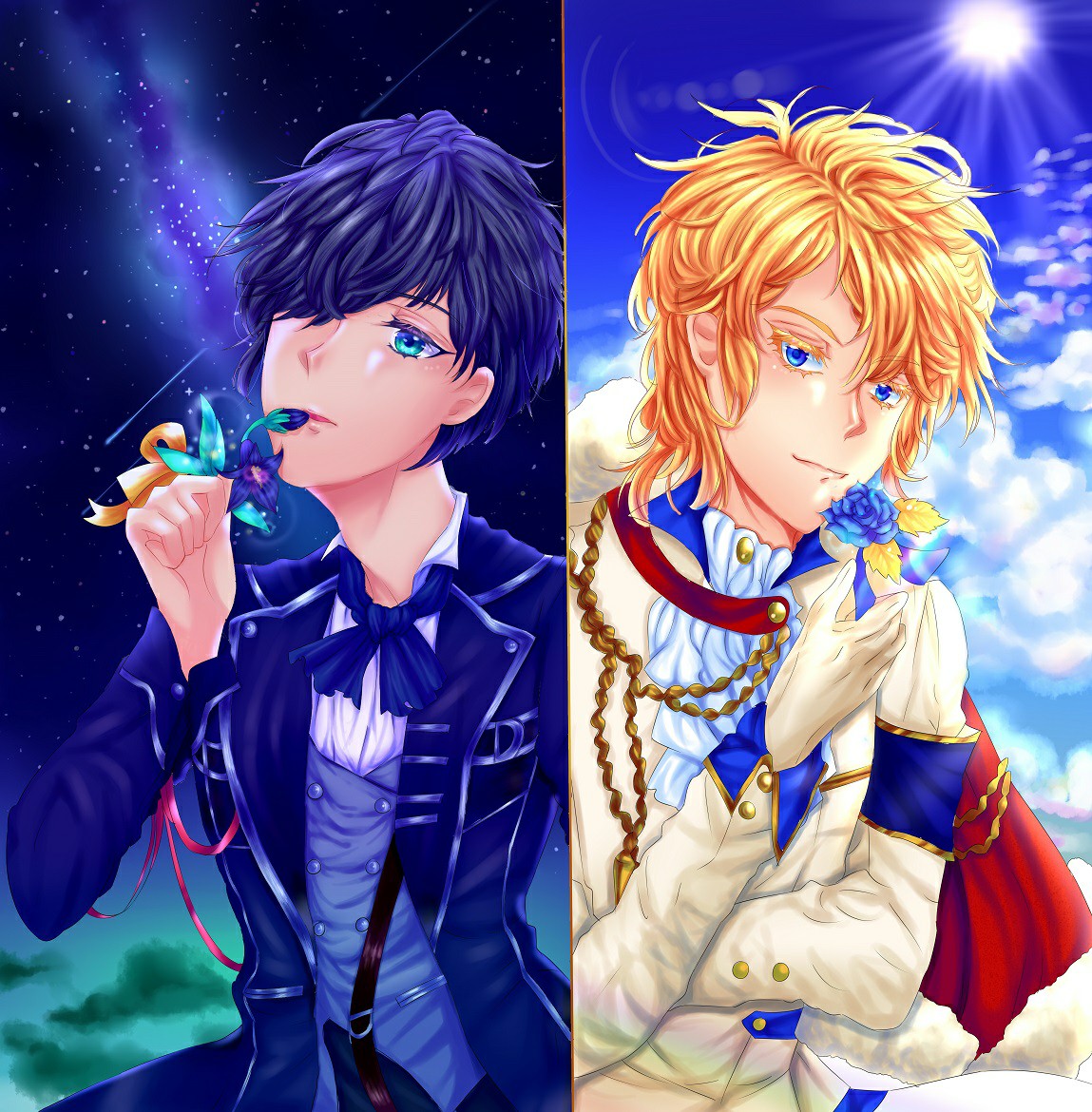 “I’m glad that today is a holiday. Well, even if there were school, I doubt anyone would study…”

“Was it because of last night’s party? Did the Prince do something ridiculous?”

“That’s right. Thankfully, Shari has awoken me to reality—but still, I feel like part of me underwent irreparable damage… —His Highness Leonardo…”

They held another meeting. Just like the previous time, they sit on sofas around a table and drink tea.

“Well… at first, I thought nothing would happen…”

“…let me guess, something did happen?”

Darjeeling, which had a high energy restoring efficacy was served to both Sharina and Angelica. Riol was given ginger tea to reduce nausea—those are some perceptive maids.

“It’s worse than expected. Listen well, both of you…”

After sipping her tea, Angelica began to talk. Her shoulders drooped for exhaustion.

Then, she began to tell about the ridiculous event that happened at the First Prince of Elgacia’s coming of age party last night.

The majestic hall of the royal palace—it was Angelica’s first time stepping there. A large chandelier floated in the air instead of hanging from the ceiling thanks to some sort of magical instrument. An elegant melody was being played by the court musicians, and an array of luxurious dishes lined both sides of various tables.

“How wonderful! It feels as if I’m a princess in a castle…—wait, I’m indeed a lady, though!”

Since it was her first time visiting the castle she had only ever seen in paintings, plays, and stories, Angelica was really excited.

All this time, she had only ever attended either the parties of her family’s acquaintances or her own house parties. A party held at royal palace? Not so much. Her father did receive invitations, rarely. She herself wasn’t as lucky.

“Fufu, this isn’t even the best part! Later, you’ll get a chance to give your greetings directly to His Highness Leonardo!”

This was the First Prince’s coming of age party. For his daughter, whom had yearned for the Prince, her father had worked hard, and with his utmost effort, secured an invitation to the party.

“Unfortunately, your turn is the last one. It doesn’t change the fact that you can still speak directly to him, though.”

However, said yearning itself had turned to ash…

“Thank you for your invitation…”

“Fuun. Keep in mind that I didn’t invite you because I wanted to.”

The greetings began at the start of the party from those the closest to the royal family.

“Congratulations for stepping into adulthood, O the First Prince of this Majestic Kingdom…”

Now, it was the turn for the Rose Garden—his fiancé candidates—to congratulate him.

“I sincerely wish you a happy birthday, Your Highness Leonardo…”

“How unoriginal. Everyone keeps saying the same thing.”

Even though his fiancé candidates had dressed up more finely than usual, Leonardo Randall Ulysia Elgacia didn’t waste time to cut them off—

—such was the attitude of the supposed King-to-be.

Angelica muttered while being engulfed in a feeling of emptiness.

—and he’s turning into an adult today? This entire time, I’ve seen nothing more than a snobby brat with jerkish attitude…

“Oh my, they must’ve been troubled. It seems that none of them was acknowledged by His Highness.”

“He didn’t even respond to anyone up to that point—not even to anyone from the Rose Garden.”

“The Prince probably has lots of things going on in his mind right now. After all, he has just ascended to adulthood. It’s time for him to start thinking about inheriting the throne…”

However, it seemed that everyone else perceived reality a tad bit differently…

—…what ‘acknowledgement’? …what ‘lots of things going on in his mind’?

But, wasn’t Angelica herself the same until a while ago? ‘Their charms don’t work on His Highness! Because he looks pass outward appearances! How wonderful!’

As such, she couldn’t criticize them.

Like those girls yearning for the prince, the noblemen were dazzled by their next King to be.

Angelica kept being reminded of her black history.

“…well then, since everyone is already here—“

Angelica lifted her face at the sudden voice,

Leonardo was confronting all of the Rose Garden, his index finger pointed at them—

“—Rosalind Ariarose! Below are the documents! I hereby order you to disband ‘Rose Garden’!”

In front of the powerful, influential, noble families close to the royal family—

In the middle of his coming of age party—

—he out of nowhere proclaimed so with a booming voice.

Next, Rosalind’s slightly trembling voice could be heard.

…usually, no such thing would happen until the princess was selected, because disbanding it now would also mean breaking off the engagement with all of them…

“You still dare ask ‘why’? Fuun, basically, you’re saying that you won’t admit your wrongdoings. How thick-faced you are.”

In such a tense atmosphere, the music also abruptly stopped. It was like fire being splashed with water.

Rosalind’s eyes locked with Leonardo’s. The other candidates seemed like they were on the verge of fainting.

“I’m talking about your harassments towards a certain good, young, lady! I won’t let you say you don’t remember, Rosalind Ariarose!”

“You’re a crazy, jealous, controlling woman who dared tell her not to get close to me! Basically, you’re restricting her from doing what she wanted to do all along!! Such a vile, wicked, woman isn’t suitable to become the national mother!”

Angelica’s childhood and also best friend, Sharina Clydea, was the reason behind Angelica’s awakening and also her reason for attending the party.

“Isn’t the one who’s wrong that girl who tried to approach His Highness without being aware of her status?”

“Shut up! You’re all in cahoots! All of you are ugly, scheming, women who are rotten to the core!”

The members of Rose Garden began to explain, however, Leonardo cut them off without a care.

In the first place, their explanations were faulty, too. Sharina never tried getting closer to Leonardo—not a step, not even half a step closer.

“If you understand, leave! Never appear before me again!”

Rosalind, her shoulders trembling, responded to Leonardo, who was already pointing to the exit door.

“…t, the forming of the Rose Garden is based on tradition. It’s arranged by the Royal Family, Ariarose Family, Rodriguez Family, Garry Family, and Campbell Family. Furthermore, Your Highness’s parents are absent due to foreign affairs, so… Your Highness’ order, is basically void… it’s not possible to cancel the engagement with just your words alone…”

Soon, everyone else in the venue regained their senses.

It was the turn for those who hadn’t yet give their greetings to Leonardo to speak.

“No matter how you look at it, this can’t be a session for exchanging greetings…”

As Angelica’s father had said, the coming of age party had indeed progressed into something else…

“…in short, that’s what happened…”

As she finished talking, Angelica quietly put her teacup down.

“Riol, calm down. In the first place, when was he ever sane?”

“…I’m truly indebted to you, Shari… if I hadn’t come to realize the truth as soon as I did…”

“That party was the depiction of hell…”

“If I were there, I wouldn’t have been able to resist the urge to kick him.”

She was truly naïve. She thought that at worst, he just wouldn’t dance with the Rose Garden and would speak his usual delusions regarding their (non-existent) relationship…

It didn’t matter even if he was a Prince… no, in the first place, he should be aware that he couldn’t just spontaneously end an engagement without permission like that…

…did he think that because he’s going to be the next King, he can do anything as he pleases?

Even if they were to wait for the actual King’s return, the reputations of Rose Garden’s members were already smeared with so much mud, there were nothing left to be seen.

“But, if Rose Garden were to disband like this, can they even secure another person to become His Highness’ fiancé immediately?”

“Impossible, since that new fiancé’s family would also become the enemy of former Rose Garden’s members’ family. Basically, they can’t.”

“No, wait, that new, possible, fiancé of his—we can’t be talking about someone else other than Shari.”

Immediately, everyone became silent. No one could utter a single word.

Let us know what you think~ Cancel reply